Some combination of television, radio, smart phones, computerized gaming systems, computers, DVDs, CDs and videos are found in most young children’s homes in the U.S. today. While they make it possible for us to enjoy a very diverse selection of entertainment, they also often function as virtual babysitters for millions of our children each year. The results of numerous studies published recently by the medical research community indicate that children who spend too much time watching TV, sitting at computers and playing computerized games are much more likely to become overweight.

The American Academy of Pediatrics recommends that there should be no television or computer time for children under age two, and no more than two hours per day for children over two. 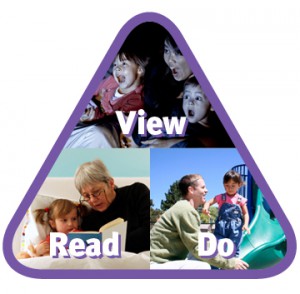 VIEW a children’s show with your child that involves physical movement, and then physically move as your child moves.

READ a book that depicts or tells about its characters moving, and then act out what these characters do. Stop in the middle of your reading and encourage your child to get up and pretend with you.

DO something fun and physically active that is related to something you both watched on TV or read in a book. If you’re viewing a show or reading a book about the ocean, pretend your child is a fish, and encourage him or her to pretend to swim through the water!

*This information is recommended by the Ready To Learn Department of PBS.