Tips for Parents of Infants

Babies are born with a natural ability to regulate the amount of food they need. They will give you cues when they are hungry, such as crying or rooting. When they are full, they will turn away from the bottle or breast and begin to play or act uninterested. Pay attention to these cues. Listen to your baby about when to feed or stop feeding!

What about the bottle? 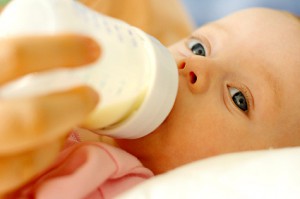 These are guidelines only. Each baby is different. Remember that if your baby is having several wet diapers a day and seems comfortable, he is probably getting plenty of breast milk. Sometimes babies will hit a growth spurt during which they will nurse for longer periods of time. This is the way that your milk supply is built up and baby should be allowed to nurse a reasonable amount of time. Cow’s milk should NOT be given to infants and give only whole milk to children from ages one to two.

Cereals and Other Starchy Foods

Use infant cereals when first providing cereal, as they are fortified with iron. Iron stores the baby is born with tend to become lower around six months. Some doctors may recommend beginning cereals at four or five months. It is best to ask your pediatrician what she would prefer.

Juices are not necessary for infants and should be used sparingly. Notice that these serving sizes are for the whole day!

Infants usually get the water they need from their formula or breast milk. For infants up to five months of age, give fluids other than breast milk or formula only if recommended by the pediatrician. Do not use products such as Pedialyte® unless directed by the physician. For ages six to twelve months, offer fluids whenever the baby shows interest.